Reading the blogs, news articles and conference reports, it would be easy to conclude that the smart city was already here. There seem to be so many systems being rolled out, and so many ways in which city governments are making clever uses of IoT and other technologies to improve the lives of their citizens and the efficiency of their own municipal operations.

The reality is a little different. Not many smart city applications are fully deployed, operational, costed and budgeted solutions. Machina Research, sponsored by Nokia, has just carried out a major study of smart city deployments around the world. We looked at 22 cities and evaluated the maturity of their applications and their plans across a number of different domains.

Many of the stories about smart city deployments turned out to be about pilots, though this is not always clear. We were somewhat surprised to find that San Francisco’s much heralded smart parking scheme, SFPark is a pilot, and one that has not been taken to full deployment for want of a business model to justify the investment. This is despite evaluations which show that the technology works and has achieved its declared objectives.

In addition, the term “pilot” actually covers a wide range of different kinds of implementation, from small-scale proof-of-concept demonstrations, through “living lab” action research and development in a live environment, to full-scale tests of business viability.

The plethora of pilot smart city deployments is not really that surprising. It is to be expected that some solutions will be piloted and then found wanting; that is, after all, the point of doing pilots.

In cities, though, there are specific difficulties with moving from pilot to full deployment, even where the technology works and delivers the expected benefit. In some cases, this is because that benefit does not translate into an ROI that can justify rollout; a smart parking scheme, for example, might reduce the amount of traffic congestion in the city center but lead to a decline in revenues from fees and fines. This is exactly what seems to have happened in the case of San Francisco, where the smart parking implementation was successful in reducing cruising time spent looking for parking but did not pay for itself. The UK city of Birmingham similarly found that its smart parking trial did not provide a business justification for deployment. In other words, for some smart city applications, the benefit can be quantified but only makes sense if they form part of an overall vision for the city.

In other cases, there is an ROI that would justify roll-out, but no long-term budget that can support the investment. Here vendor financing, public private partnerships and central government financing may all have important roles to play.

The prevalence of pilot smart city deployments has led us to identify at least three routes towards a mature smart city:

These advantages and disadvantages of each of these routes are illustrated below in Figure 1. 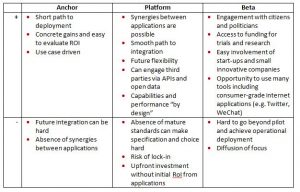 We do not believe that one of these three routes is the right answer; each has something to recommend it, and which one fits best will depend on the city’s resources, issues and priorities. A beta approach may deliver more visible easy wins quickly. An anchor approach might be absolutely determined by a single issue, such as preparations for earthquakes, which dwarfs all others.

Few cities are pursuing an absolutely pure form of one of these routes. Most have something of more than one route; either they are hedging their bets, or are in the process of shifting from one route to another. Several are at such an early stage that they have not yet settled down into one route or another.

The full report is published as “The Smart City Playbook” available here.