Internet-connected devices, cheaply available data collecting sensors and other technologies are rolling up into the wave of "Internet of Things" that is about to come crashing down on data centers.

As low-cost Internet of Things monitoring modules from companies such as eConais Inc. have hit the market recently, the business potential of IoT has emerged. In turn, the number of Internet-connected products is expected to explode and by 2020, there will be up to 30 billion devices connected with unique IP addresses, most of which will be products, according to Gartner Inc.

Others predict that number could be higher, especially if radio frequency identification (RFID) devices are included.

It puts complexity on the data center to figure out how to monitor and manage all of these devices in the field.

"What we see now are people adding connectivity to devices that weren't Internet-connected before, like parking meters in Austin, Texas," said Bill Morelli, associate director for the Internet of Things division at IHS Research, a market research firm based in Englewood, Colo.

Organizations have begun to collect and analyze the flood of incoming data for their own use, with the potential to share the data for greater uses in years to come.

"Maybe 15 years from now, they will use the data to tie in with tolling and automobiles and have all of them talk to each other to create a value proposition," Morelli said. "That's the goal."

The Internet of Things a boon to business

Indeed, there are myriad ways IoT is being put to use. U.K.-based Elektron Technology recently released a food safety monitoring tool that connects to Xively, an IoT cloud service. The tool, called CheckIt, performs real-time, remote monitoring of food storage and preparation areas to allow restaurants, supermarkets and other businesses to monitor compliance and reduce food safety management costs.

One other example is Walt Disney Parks and Resorts in Orlando, which underwent a massive information management project this year involving RFID-based bracelets distributed to guests.

These bracelets essentially represent the Internet of people; sensors in the bracelets track what guests buy, where they visit and how they shop, and the data collected personalizes the customer experience, said Vlad Rak, vice president of Disney's enterprise architecture and information management, during a recent Gartner ITxpo conference session.

"We know who enters the park and other volumes of data that we derive information from without violating privacy," Rak said.

Today, Disney has about 75% accuracy in identifying its customers and has a goal of 95%. "It is a huge revenue generator," Rak said.

Now, Disney's IT team is hustling to manage the influx of customer information and invest in data governance and information management processes, he said.

While IoT holds enormous business value, the data deluge that comes with it could be problematic for data center managers. Company leaders want sensors to monitor just about everything but don't see the big-picture issue of storing, managing and analyzing all of the information they collect, analysts said.

"They put a remote status switch on there and get excited because now it can be remotely controlled and monitored," said Philip DesAutels, Xively's vice president of technology, and researcher for the World Wide Web Consortium at MIT. "They can optimize their product ... track customer product use, they can upsell ... [but] it puts complexity on the data center to figure out how to monitor and manage all of these devices in the field."

There's also the issue of how to send and receive all of that data. Sending bits of data from a thermostat via HTTPS might mean 1,800 bytes of data, but multiply that by 20 million readings per day and bandwidth use goes through the roof, DesAutels said.

"How do you store and archive that [data]?" DesAutels said. "You might face a massive bandwidth cost from tiny bits of data. ... Little data becomes a problem when you start doing millions of things."

Protocols designed for IoT attempt to solve that issue -- specifically, IBM's MQTT protocol. Some Xively customers already use it and other protocols similar to MQTT, such as Cisco's publish-and-subscribe-based message protocol for its Jabber instant message service.

The MQTT standard is expected to be finalized within two years, when more products will be designed for publish/subscribe protocols (versus the read/write protocols of today).

"But then, data centers will have a new protocol to contend with, and it is a new approach," DesAutels said. But, these new protocols are "going to have a big impact in terms of reducing I/O."

"IoT traffic will increase the demand for data centers, but it may be in demand for the storage infrastructure and the mobile connectivity that data centers are starting to see now," Sapien said.

Does IoT require a plan?

While some planning must happen now to keep from drowning in data, there's no need to buy racks of servers today, analysts said.

"You would think that data centers would be adding capacity and [are] being built on every corner to process all of this data, but they aren't; the [infrastructure] technology is moving as fast as the need," said Jason dePreaux, associate director for Data Centers and Critical Infrastructure at IHS. "A lot of what is being enabled now is due to what the existing infrastructure can offer."

For example, server virtualization can increase the number of workloads per physical server.

Plus, systems and standards are needed for things like IoT "smart cities" to work. There are also consumer privacy issues and other legal and regulatory standards that need to progress in parallel with IoT technologies, Morelli said.

"It won't happen with the flip of a switch -- it will be evolutionary," Morelli said.

In the meantime, enterprises are also looking critically at operations to decide whether they want to continue to build and add capacity, or outsource to a colocation, managed services or cloud provider -- all of which operate efficiently, dePreaux said.

The tech industry has also found ways to do more on the device level.

"A lot of that type of thinking is going on as people look at the network-connected devices: Where should the data reside, and does it need to be passed off over a network?" Morelli said.

IoT's impact on the technology market

Overall, the growth of IoT application use will mean heavier reliance on cloud providers such as Amazon Web Services as both mobile connectivity and IT services require cloud infrastructure, analysts said. 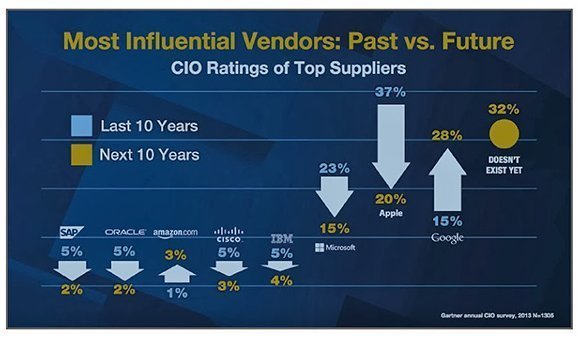 Figure 1. Gartner tracks the most influential vendors, according to CIOs.

"If you have 200,000 devices you are tracking, plus the time stamps of data and the transactional data of who did what when, you are in the terabytes of data category, so we see the analytics being done in the cloud," DesAutels said.

Data collected in the cloud will also be analyzed there; enterprise resource planning and customer relationship management systems will connect to the data in the cloud. Some of Xively's customers already use their trusted data analytics tools, such as MapReduce, Hadoop and Mathematica in the cloud -- though not all have an actual use for the data they crunch, DesAutels said.

"[Companies] use a product to collect data, and they aren't sure what to do with it yet, but they know they'll want to use it at some time," DesAutels said.

Heavier use of cloud is just one way that IoT will impact how companies use and buy technology in the future. The most influential vendors of today and the recent past -- including Apple, IBM, Microsoft, Oracle and SAP -- will have lost market share by 2020, according to Gartner's 2013 CIO survey.

That's because IoT and "digitalization" completely change what companies will need from technology vendors, how technology is bought and what will be bought, said Peter Sondergaard, a Gartner analyst, during a presentation at the Gartner ITxpo.

ChrisGrant - 18 Nov 2013 11:59 AM
Very interesting article. I believe we are about to see an evolution moving to a significant change in I.T. and the datacentre. I wish I knew the answer to how we are going to monitor it all. I am currently working as an advisor to Alquist who have pioneered the use of fibre-optic based teperature sensing for Data Centres which is just another aspect of monitoring.
[-]

ncberns - 16 Jan 2016 8:53 AM
Almost an ingenuous question. Data is rushing in, well beyond our ability to parse it. We have to order it before we can put it to work, before it can do its intended job or ease ours.

We've known this was coming. We've been talking about it for years. No, surprise, the IoT is actually here. And we're still scrambling to see how we'll make use of it. Well hold on, this is just the tip of the data pile. The flood is just beginning.