The problem is worse in outer space, but it’s pretty bad on earth too. Invisible, odorless airborne toxins and chemicals sicken people indoors. The American College of Allergists estimates that 50% of all illnesses are caused by polluted indoor air.

What causes indoor air pollution? What are the symptoms? How can IoT reduce air pollution? How can biomimicry help? Should you read further? Check the air quality index where you live and decide for yourself.

Indoor air pollution kills over four million people every year according to the World Health Organization. Many household items release harmful toxins. These include gas stoves, building materials and furnishings made of certain pressed wood products, insulation with asbestos, carpets, household cleaning products, central heating and cooling systems. Air filters can’t help much as these pollutants are gaseous and flow right through them. The main sources and symptoms of pollutants include: 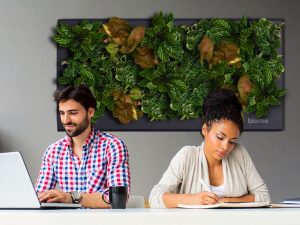 Foobot is a small, well-designed air monitor with a number of sensors that continuously monitor indoor air quality. It integrates with other products such as Nest and ecobee and provides an open API for integration with other applications. Some of the parameters it monitors include:

NASA researched how to keep air clean for astronauts and found biomimicry to be effective. This approach applies elements of nature to solve complex human problems: “Plant roots and their associated microorganisms then destroy the pathogenic viruses, bacteria and the organic chemicals, eventually converting all of these air pollutants into new plant tissue.”

“Many substances that are toxic for humans can be broken down into non-harmful substances by plants,” explains Foobot. “Other substances are assimilated, becoming part of the plants’ tissues. The bacteria that live in the soil around plant roots are also capable of metabolizing harmful substances.” 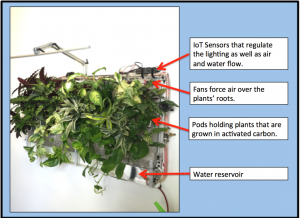 Biome offers a stylish, indoor living wall with plants growing in small pods. Air is forced over the roots of these plants, where microbes remove and digest the pollutants. They release oxygen and there aren’t any filters to clean. The unit is self-contained and resembles a large, wall-mounted flat-panel TV. Air quality sensors determine how much air should be processed and adjust the speed of the fans accordingly. Forcing air over the plants’ roots increases the rate of air purification.

The next time you’re drowsy at work, check the air quality first. Perhaps bioremediation might just make you feel better!