Since opening in 2017, Mercedes-Benz Stadium in Atlanta has set the standard for what a stadium experience in the 21st century should look like. It is one of the most technologically advanced stadiums in the world, tricked out with a fully integrated Wi-Fi network and a revolutionary screen on the roof — but it’s not the only one making waves. Stadiums and arenas around the country are jumping on the future-tech bandwagon, offering dazzling, one-of-a-kind experiences to fans. Here are five more you should know about: 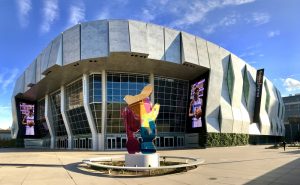 While these venues are setting the stage for a new era in stadium technology and advancements, this is hardly a comprehensive list. New plans for multimillion-dollar building projects are appearing all the time. Be sure to keep an eager eye out for high-profile renovations of arenas looking to dive into the future.