This content is part of the Essential Guide: A guide to healthcare IoT possibilities and obstacles

This year we will see more and more experiments where internet of things devices enter the human body for diagnosis and for treatment. With advancements in IoT in healthcare and miniaturization, along with leaps in IoT innovation, we are embarking on a journey of personal uber-connectivity that will spark many debates: tech implants in the human body.

I have always been fascinated with movies that show humans shrinking to microscopic size; like the 1966 sci-fi movie Fantastic Voyage. In the film, a submarine with a small crew is shrunken and injected into the bloodstream of a dying man. While this might have been seen at the time more like a psychedelic dream, nowadays it is closer to reality.

We are seeing more experimentation with IoT entering the body. Medical IoT implants can detect disease, manage pain, or even decode signals from the brain and relay them to other parts of the body to possibly cure paralysis. 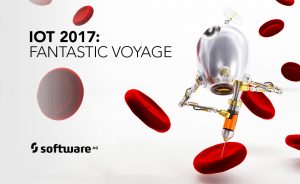 Here are three other trends I see for IoT in healthcare and the connected body:

Medical devices with embedded IoT make direct communication with the implants possible. Pacemakers already have that capability, but ongoing advancements now allow for direct interaction with the neural network, opening up a whole world of possibilities. There was an experiment where a paralyzed monkey gets a brain implant that communicates with a computer, which decodes brain signals to move and sends the proper instructions to his lumbar spine. This type of experiment is now at the animal stage, but my gut feeling is that this will quickly evolve to human experiments.

Another interesting area is the idea to fight Alzheimer’s, where the loss of memory will be compensated with uploading your thoughts to a computer.

Where will this leave us? Well for one the security debate will flame up, like in Homeland where someone was assassinated by hacking his pacemaker. And once we start fiddling with our brains, we will see serious debates popping up suggesting that we are creating something like the cybernetic Borgs in Star Trek (“Resistance is futile.” “You will be assimilated.”).

This trend will continue to spark debate, as some people are putting technology into their bodies for other than medical reasons. This has already been done for years with animals — dogs and cats get RFID chips for tracking. For humans, this is more a convenience (or personal style statement) than anything else. Near field communication digital wallet chips inserted into the body make it so you don’t have to carry credit cards around anymore. Other recent experiments include people embedding LED lights under the skin to light up their tattoos.

Although some of the medical innovations for IoT in healthcare are still decades away from mass adoption, I do see the potential of a new divide in society. Starting from a division of “haves and have nots,” we may be evolving into a society that is divided by something that I would call the “enabled versus the unaltered.”