A significant decrease in deal activity in the first six months of 2017 is proving 2016 to be the record year in IoT mergers and acquisitions by a large margin (see chart below).

More significantly, disclosed dollar volume of $2.3 billion in 2017 year to date is $14 billion lower than in the same period of 2016. While 2016 witnessed five “mega-deals” over $1 billion, including Softbank’s $31.4 billion acquisition of ARM, there have been no deals over $1 billion yet in 2017. Excluding last year’s mega-deals, 2017’s year-to-date aggregate transaction value is almost equivalent to the same period in 2016, amounting to $2.3 billion and $2.5 billion, respectively.

While telematics technologies represented almost half of the 2016 IoT M&A transactions (approximately 60 transactions out of 119), followed by hardware and devices, the Comptel Oyj/Nokia transaction is symptomatic of the strong interests in IoT analytics (big data for IoT), security, smart offices and homes.

In addition, we highlight the following points: 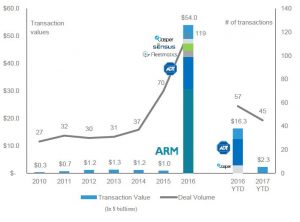 Just as we saw in the M&A market, record dollar volume in 2016 was driven by a few large deals. Infineon’s Series E financing of $935 million and Sigfox’ raising of $160 million together accounted for over half of total dollar volume for the first six months of 2016 and were a major influence on average deal size. The most significant private placement in the first six months of 2017 is Actility’s $75 million raise in April. 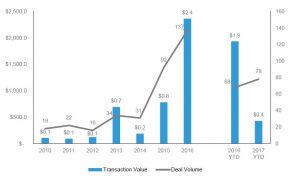