I wasn’t really sure how fast and how deep IoT technology was penetrating our daily lives until my friend told me about his snoring and his sleepless nights.

My friend, like many other millions, has been suffering from sleep disorder problems for the last couple of years. But in addition, he has also been noticing low-energy levels during the day, causing him fatigue, excessive sleepiness and lack of focus. Just recently, he also realized he has been snoring; he surprisingly found out when his family dared to tell him that he loudly snores every night. 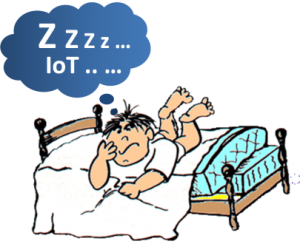 Troubled with the news, he immediately started to look for solutions to his snoring, sleep disorder and daily low-energy levels. He didn’t know they were all related.

My friend decided to seek medical advice, where he was asked to undergo a sleep test. A few days later, he was diagnosed with sleep apnea, a common sleep disorder that occurs when breathing is briefly interrupted while asleep due to blocked airways in the throat area, in most cases. The person with sleep apnea is generally not aware of these short breathing pauses that can occur hundreds of times a night. One of the consequences is that the brain and the rest of the body may not get enough oxygen during sleep. If left untreated, sleep apnea can result in a number of health issue, sometimes serious heart problems and deterioration in the person’s quality of life, producing excessive daytime sleepiness and morning headaches, as well as lack of energy and focus during the day. While loud snoring is often a symptom, not everyone who snores has sleep apnea, and not everyone who has sleep apnea snores.

My friend told me he was lucky to be diagnosed with a “moderate” level of sleep and has a few good available remedies, one being a CPAP machine, an advanced small apparatus that can be plugged in and hidden next to the bed. It has a very quiet air pump and nose mask worn while sleeping to ensure the user’s airways do not become blocked. The machine reads and registers daily usage data, such as sleep interruption, air blockage, leakage, rate of short breathing pauses and all other details to measure the machine’s effectiveness.

Advanced machines have also a built-in wireless connection, so the data can be sent wirelessly in real time to a central healthcare system that monitors the progress of the treatment and report any abnormalities. In general, these machines are covered by insurance, with a condition that the patient uses the machine for an average of at least 70% and four hours per night during the user’s normal sleeping hours. This condition is to ensure that the machine is used effectively for the person’s best treatment and well-being. For the insurance company, it helps optimize growing machine costs and usage effectiveness among patients while reducing unnecessary administrative follow-up costs.

After receiving the machine, my friend used it for a couple of days. Then he got disappointed that it didn’t bring noticeable improvement to his sleep disorder, nor did it boost his energy level or focus during the day, as he expected. He became even more frustrated as he couldn’t manage to sleep well with mask attached and pump next to him. The only good news was that his family didn’t hear him snoring anymore!

Although the usage condition of four hours per night and 70% of sleep time was stated in the machine’s instructions, my friend didn’t take it seriously. He also didn’t realize how reliably the usage data report was transmitted automatically to the monitoring center. After the first couple of days of disappointing results without noticeable improvement to his sleepless nights, he turned the machine off, eventually putting it away, fully disconnected.

The same week, he received an automated call warning that he wasn’t using the device properly! He was reminded to use it per the instructions to achieve the effectiveness of the remedy. He was also reminded that the machine wouldn’t be covered by insurance if he didn’t adhere to the usage condition.

This effectively pushed my friend to retry the machine, following the detailed instructions. After a week of trying, he quickly learned to modify his sleeping behavior and adapted to using the machine every single night.

A couple of weeks later, he started to feel a positive difference, experiencing much better deep-sleep patterns at night followed by days full of energy and focus, as well as a fresh feeling every morning that lasted with him throughout the work day. Since, his sleeping behavior has been modified positively. The machine also reported improvements to the rate of short breathing pauses.

“Now, with these amazing results, I can’t sleep without the machine anymore,” my friend said with a big smile on his face.

Happy for him, I started to explain to my friend that this automated process is the basis of IoT technology. It helped him accurately track his daily usage, guiding him to modify his treatment behavior track while satisfying the insurance needs.

“Without this wireless automatic reporting technology, the machine could have stayed on the shelf and you would have lost interest in getting the right treatment and continued your suffering,” I told him.

My friend didn’t really seem to care about understating what or how IoT works, but he smiled and said, “OK, anyway. I can’t sleep without this IoT anymore!”

My friend’s story reminded me that we, as individuals or as a society, must start harvesting the benefits of IoT technology to let it have positive impacts on our daily lives in a way or another. Behavior modification is just one outcome of many.

In recent years, the value of IoT in the health sector has been successfully validated in major business areas, such as remote patient monitoring and wellness and healthcare operations. In the very near future, when devices are all connected and generating explosive amount of data and combining with more advanced technologies such as artificial intelligence, individuals and societies will have better visibility and control of their health and well-being.

Early adopters from healthcare providers and industry players are investing in IoT initiatives and seeing real value emerging, including improvements in consumer experience and operational cost-savings.

The healthcare IoT industry is projected to be the third most advanced in IoT implementations, with more than 75% of healthcare organizations worldwide introducing IoT into their operating models by 2019. Major growth of the IoT healthcare market will be driven by the evolution of artificial intelligence technology, the rise in investments and the increasing penetration of connected devices in healthcare settings.

Accelerating innovation in this sector will definitely create step-change improvements in patients’ lives while introducing new business models for the entire healthcare industry.

The important lesson I got from my friend’s story is that most people don’t really care what IoT is. What really matters is how it improves a person’s quality of life with a positive outcome being noticeably achieved.

My friend is happy; I’m glad to hear him say, “Yes, I can’t sleep without IoT anymore!”