The internet of things generating large amounts of data is a valid concern. There is a lot of pre-IoT era research on data, information, knowledge and wisdom. It is worth revisiting these fundamentals in context of the new IoT era. Systems architects, analysts and programmers involved in building applications using IoT may need to rethink the data fundamentals in creating information. Some of the thoughts in this post build on the thinking behind the design of the smartphone in an era dominated by mainframes. The potential of a smartphone in the context of a mainframe was not understood then. IoT has similar challenges with pre-IoT era information technology and operational technology.

I’ll start with humans first and then add “things” to the context.

What is data? In the context of this post, data represents the capture, creation, storage and retrieval of data in digital form. The digital form includes audio, video, print and images.

Who decides what is information? The individual receiving the data decides. Not the person creating the alleged information. Before you react, take a deep breath and think about it. Two people receiving exactly the same data at the same time may or may not perceive the data as information. Interpretations of the same data may change with time. This may explain what is blatantly obvious to some is absolute nonsense to another.

What is wisdom in this context? Wisdom is the ability to make a decision using information for the benefit of the intended beneficiary. The intended beneficiary may be the individual, the enterprise, customer, truck driver, farmer or factory owner. Starting with no wisdom, an individual’s decisions may be good or bad. Doing nothing is also a decision. With more wisdom, better decisions are made. Better according to whom? Better according to the individual. 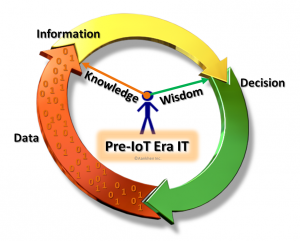 IT departments are forever scrambling to provide information demanded by enterprise users. In an outsourced world, sourcing data from external enterprises with the same internal problems adds more complexity for IT with no end in sight.

What is the quality of decisions made by individuals with the data they get today? Do individuals want information or prefer some of the decisions to be made for them and receive information as an FYI? Supply chains, for example, are operational. Decisions made by people impact operational efficiency. Some make decisions at their own pace, increasing lead times and delays. Some are a result of inefficient systems with data integration delays. Can IoT eliminate some of these delays for routine, repetitive no brainer functions?

IoT includes devices and sensors that capture data without human intervention. In the context of IoT, artificial intelligence is the combination of knowledge and wisdom.

What is data in an IoT context? No change in previous definition, but emphasis is on the automated collection of data without human intervention.

Who decides what is information in an IoT context? A team of individuals including subject matter experts, system architects and programmers do. Algorithms and rules defined by the team process captured data to create and present information as designed.

What is knowledge in an IoT context? Knowledge is the collective representation of rules and algorithms to process information. Add machine learning capability to things and human-like knowledge can be acquired. 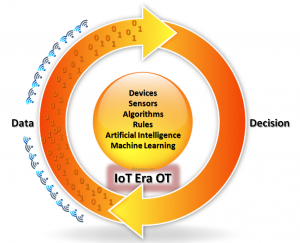 What is wisdom in an IoT context? Wisdom is the collection of algorithms and rules to make decisions using information for the benefit of the intended beneficiary. In IoT, the intended beneficiary can also be another thing connected in a network of things that performs its function at digital speed. The result of a decision can be learned by things from new data to increase its wisdom and predict outcomes.

The technology representing knowledge and wisdom can be combined and embedded in a single thing, distributed across a network of things or a combination of things and systems.

The things in IoT are designed and programmed with a purpose. Subject matter experts, architects and programmers embed their knowledge and wisdom in things and supporting systems to make decisions. That may explain why some systems are great and others are a pain!

IoT provides the ability to offload enterprise users from some of the operational decision-making. Removing human intervention enables consistent, predictable, repeatable, 24×7 operational decisions at digital speed. Frustration with pre-IoT era IT technology and high costs can be reduced significantly by adding OT using IoT to eliminate data to decision lag times. Data to decision in zero seconds is a benefit of IoT-driven digital transformation.

Examples of IoT enabled information in use today:

Was this post, data or information useful to you? Would love to get your comments.