2016 was a record year in the IoT sector with a total of 127 transactions, reflecting a nearly 60% increase in transaction volume compared to 2015 and an unprecedented total disclosed transaction value of $39.9 billion. The biggest deal, responsible for a significant part of the jump in total disclosed value, was the acquisition of the U.K.-based chip maker ARM by the Japan’s Softbank for $31.4 billion in September 2016. Furthermore, Verizon Communications continued its strategy in the telematics industry by acquiring Dublin-based Fleetmatics Group, a provider of GPS fleet tracking solutions, for $2.4 billion at a 7.0x LTM revenue multiple in August 2016. Other large deals include Sensus’ acquisition of Xylem, a leading provider of smart meters, network technologies and data analytics services for $1.7 billion and Cisco’s acquisition of Jasper Technologies for $1.4 billion (mentioned in my previous post).

All four of these 2016 transactions fall in our “top 10” list of IoT M&A transactions going back to 2010. In addition, we highlight the following points: 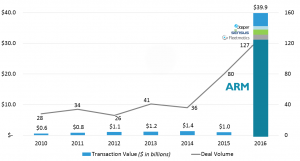 Private placements have also experienced a significant a jump in transaction volume and total dollars. The total of 137 transactions represented an increase of 47.3% over 2015 and total dollars invested increased 3.1x to over $2.4 billion, reflecting an increase in average transaction size from $9.7 million to $18.4 million. This performance is partly driven by Infineon’s fundraising of $935 million in debt financing in April and NavInfo’s fundraising of $521 million in May. Furthermore, Sigfox, a French startup providing innovative IoT networking solutions, raised $115 million in 2015 and an additional $160 million in 2016 — it is now valued at $600 million. 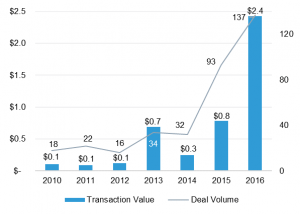