Some enlightened people like Elon Musk do not dream of electric sheep, they dream building human-computer hybrids. Elon Musk’s Neuralink company’s goal is to explore technology that can make direct connections between a human brain and a computer. Musk floated the idea that humans will need a boost of computer-assisted artificial intelligence to remain competitive as our machines get smarter.

Likewise, Facebook’s uber-secretive Building 8 is where the company is working on top-secret brain-computer interfaces similar to Musk’s Neuralink, however it isn’t the only future-tech Facebook has in the works. According to Michael Abrash, chief scientist at Facebook-owned Oculus Research, super augmented reality (AR) glasses could replace smartphones as the everyday computing gadget in the next five years.

I was very skeptical about the promised benefits IT vendors sold us with the famous bring your own device trend. Many IT departments struggled to keep up with yearly technology changes, now company employees increasingly wanted to use their own devices to access corporate data. It was part of a growing trend dubbed BYOD, which encompassed similar bring your own technology, bring your own phone and bring your own PC initiatives. All of them evolved empowering workforces through the so-called “consumerization of IT.” 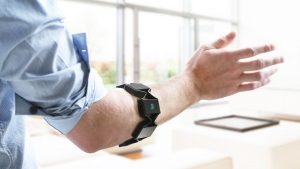 But BYOD also had a dark side. On one hand for enterprises, it threatened IT security and put a company’s sensitive business systems at risk; and, on the other hand, prohibiting it threatened employee satisfaction and happiness.

Have any of you improved your work-life balance because you used your own device to continue working after you leave your office? There are so many things that improve productivity and increase innovation, how enterprises can ensure that it was because you BYOD?

In 2013, bring your own wearable (BYOW) was one of the major trends analysts and tech writers started to hype. Let’s admit that one of the reasons why this trend has not had the impact we expected was the miserable failure of Google Glass. But Google wasn’t the only giant to fail, Apple also failed with its little-useful Apple Watch.

Other sound failures, such as Fitbit, Nike FuelBand or Toshiba Glasses, have created a bad reputation to the still-awaited success of BYOW. If you are one of those who enjoy technological disasters, here you can read about the biggest wearable tech disasters.

Let’s be optimistic; the past numerous wearables failures mean nothing. Large enterprises are now using wearables. It’s hard to predict when success will come, but it will happen. Wearables technologies will be adopted in mass in the enterprise world because very soon will be economically and financially profitable. Let´s trust the component revolution in wearables reported by TechCrunch.

What will happen after BYOW

Chris Dancy is the most connected human on the planet, wired with up to 700 sensors. Chris may be the first case of an augmented human.

Augmented reality is scaling in industrial settings, and wearables are providing the human interface to industrial IoT with new and compelling results. The convergence of machine sensors, big data and artificial intelligence (AI) tied to AR smart glasses will create the augmented workers needed for this next industrial revolution.

The novel use of AR, AI, devices and wearables are enabling easy use of devices and wearables by individuals, employees and families to measure vital signs anywhere and remotely and securely send data to the healthcare provider. New advancements in technologies (AR/AI/IoT/wearables) are demonstrating that they can aid patients and maybe change the human condition, creating augmented patients.

An increasing number of people are voluntarily contributing the data they generate to improve public infrastructure, enhance public services and increase public safety. The “citizen sensor” trend is not just limited to activists and data enthusiasts, rather it encompasses regular, everyday citizens empowered by a new generation of connected technologies that makes it easier than ever to contribute their data for the public good. If we are convinced to share our data and we are on course to wear wearables 2.0 all day, we will become augmented citizens.

In my post “The future of “The Internet of Olympic Games,” I predicted that in Tokyo 2020, technology and innovation will be pushing human performance to the limit. Technologies such as wearables, IoT, artificial intelligence, virtual reality and artificial intelligence are becoming core ingredients of training and preparation for competition. In Tokyo we will see the first augmented athletes.

How far can we — and how far should we — push these technologies? We must avoid the creation of the psychopath and sociopath augmented human, but we should not stop the bring your own augmented human revolution.

Thanks for your likes and shares.