Venture firms throw billions of dollars at blockchain startups, while both startups and enterprises prepare to capitalize on the potentially massive opportunities for blockchain beyond finance. Developers are applying the approach to solve problems in power, supply chain, health care, media and many other use cases. The technology is evolving rapidly and a rich ecosystem of players is assembling. Based on interviews with industry stakeholders and extensive secondary research, we find that the power sector has emerged as an early leader for blockchain development outside of finance, with the potential to cut costs and streamline processes in several types of power industry transactions.

Blockchain is an innovative database and transaction technology with broad potential

Outlining the basics of blockchain and dissecting its value proposition, we conclude that blockchain can be a great enabler but has its fair share of hurdles and limitations:

In the power industry, we examine the potential for blockchain in three key power applications, finding differences in value proposition, challenges to implementation and adoption timeline:

Blockchain is a distributed database technology that securely maintains a growing ledger of transactions (defined as transfers of data natively tracked by the system) and other information among participants in the network. Developers are attracted to blockchain for its inherent security, data integrity, decentralized nature, and its ability to simultaneously provide both public openness and effective anonymity. Bitcoin was the first implementation of blockchain, which proved its robustness and overall value.

Bitcoin, Ethereum and Hyperledger are the three main games in town

Some blockchain developers choose to build custom blockchain solutions with their own toolsets, but there are few true experts who are capable of building blockchain solutions from scratch. As such, most developers leverage the available tools from bitcoin, Ethereum and Hyperledger. Depending on the specific requirements of a given project, these three platforms have strengths and weaknesses. Bitcoin does not offer native smart contract functionality, although companies like Counterparty and RSK are trying to extend that functionality into bitcoin; Ethereum and Hyperledger both offer native smart contract utility. As mentioned, Hyperledger is the only option of the three to provide permissioned blockchains, which offers advantages for users who only admit known participants into a blockchain project. Bitcoin is widely regarded as being incredibly secure, although concern is beginning to emerge over the consolidation of the mining pools; Ethereum’s reputation is in question after the Dao situation and an ongoing series of denial-of-service attacks; the jury is out on Hyperledger as there have not been enough scale deployments.

Beyond these three dominant core infrastructure providers, the blockchain value chain is rapidly becoming rich with a wide range of entities, many whom build on the core three (bitcoin, Ethereum and Hyperledger), as well as many who build their own solutions from scratch. This ecosystem includes horizontal platform solution developers, vertical solution providers and enterprises that are developing products or contributing code to other projects.

Listen to a podcast on blockchain from Isaac Brown and Katrina Westerhof. 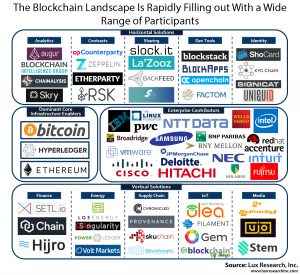 Developers are targeting multiple enterprise use cases beyond finance

While many startups and major ICT players are developing horizontal blockchain platforms, plenty of startups are developing industry-specific enterprise blockchain solutions; meanwhile major enterprises from specific verticals are exploring the impact blockchain can have on their industries. Blockchain will likely have an impact on every industry, but there are several industries where the specific relevance is beginning to take shape. 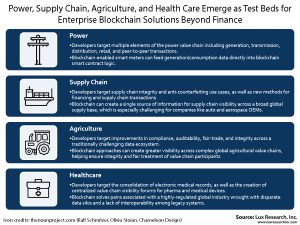 We analyze three potential use cases for blockchain in power transactions

Power transactions come in many different flavors, as electricity changes hands several times between generation and consumption. Here, we use case studies to analyze three types of energy transactions — wholesale, peer-to-peer and environmental attributes — exploring the value of blockchain, the solution architecture, the barriers and problems to be solved, and the outlook. As an example, a blockchain solution for peer-to-peer transactions is outlined below:

Stakeholders should investigate blockchain, but be realistic about fit and readiness

Blockchain is an excellent tool for the power space, streamlining transactions that have long required manual work and enabling new types of transactions that would be impractical otherwise. Much of the compatibility between blockchain and power transactions is related to the ease of measuring electricity with metering infrastructure, which allows data and markets to coordinate in a robust way. However, power incumbents are generally conservative players that are difficult to woo or uproot.

Overall, peer-to-peer applications provide the greatest value over alternatives, but are held back by regulatory barriers and a limited market size for the time being. Blockchain has a lot of potential to modernize wholesale transaction systems, but it faces an uphill battle from influential, conservative stakeholders. Meanwhile, with low barriers to blockchain adoption but also relatively low value that can be gained, REC markets are already seeing some adoption, but are unlikely to feel much impact from the technology. Other applications like EV charging and retail have little to gain from blockchain. These findings are summarized below: 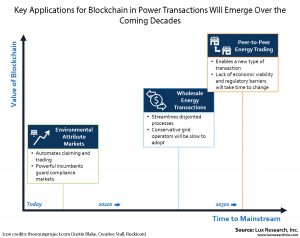